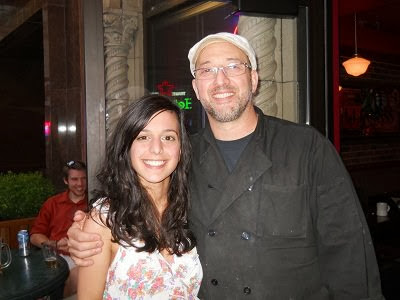 Every so often I meet someone and have a feeling that person is going to play some part in my life, for some period of time. Often it is good and unfortunately sometimes not so good.  I haven’t always recognized it but I can usually recall that moment after all the facts are in.   In some cases it is years before all the relevant acts have played out, but so many times they start with a single first meeting that is significantly different than most.

Ali walked in my store one autumn day in response to an ad I placed in craigslist for employment. My summer help had gone back to school or was about to head that way.  She was a freshman in college and looking for a job.  She had moved up here from what some call downstate and did not know anyone in the area or at school. Whether she knew it or not I was going to hire her if I could, regardless of the naysayers.  She had a slightly restrictive schedule, but she at least was prepared enough to have it with her.

This started our interactions as coworkers and friends. Or so I thought. We had our days.  She learned to fight back with me in a manner that was more of an intellectual challenge than disrespect for her elders or an employer.   It was a nice change from some of my past employees and it became obvious to some of the customers although most often it happened in the back room.
Ali worked during the school year and summer and then took a quarter off to study in Italy.  When she came back she wanted to work with me again and I took this to mean that things were going fairly well.

During her second year at college and after what appeared to be just normal work for a few months, she came walking in to the store with a grin that I was unfamiliar with. Other than that she was her usual combative self.  After about an hour or so we both had a little break and she wanted to tell me something.  I didn’t think she was going to quit but I know it’s always a possibility. Her smirk almost made me believe that if she was planning on it she was going to enjoy it.

She begins telling me about a professor she had last year for a freshman seminar class that had asked her to take on a role as advisor for the newest class of freshman. They had gotten along well when she had taken the class and they had become friendly.  Her professor had asked about her sour mood in the past month and was concerned.  So Ali offered up her complaints about me to her professor and how she wanted to quit because of our tense interactions (I am certain she might describe it differently if asked, but I am the one writing this).  With an honest reflection of her own stubbornness and need for a job she states that she had been unable to bring herself to make the commitment of quitting. I am sure there were other positives that were being weighed, but those I can’t remember or have blocked out.  Before the professor indulged her with the problems she was having, there was a general inquiry to the job.

“Ali, I didn’t know you had a job. Where are you working?”
“It’s just a little bakery downtown.”
“I used to live downtown, which one?”
“o’Bagelos.”

Apparently there was an awkward pause at this point and some noticeable surprise.

“Ali, I have to tell you something. The guy that owns that place is my ex-husband.”

Not being in the room and now having two people who know me partaking in a conversation that was probably not very flattering, I will leave my commentary to my rambling thoughts.

It was reported that after a period of time they both got a good laugh out of it and there may have been an offer to come downtown and straighten me out if needed.   We all found it funny that she moved here from downstate and the only two adults she had befriended in town just happen to have been married to each other at one point.

Whatever occurred I believe it broke through a barrier that allowed us to continue working together.  Perhaps having an ally and someone who could empathize through a personal experience made her willing to trudge through her doubts. It may have even been the catalyst that allowed my ex and I to approach each other more willingly when presented with the opportunity. It had been over 10 years without contact and now this. Oh boy.

I am pleased to report that my ex is remarried and she has traded up. We all talk when we see each other and I am very happy about this.  Ali and I continue to be friends and are now working together on an equal basis for this project (she made me add that part).  She is responsible for the web design and occasional photography.  There will an expanded section of the recipe photos when Ali shoots the pictures. Otherwise you will be stuck with what my friends and I can produce.

When Ali first accepted the job she mentioned that she has had some health problems since she was young that might occasionally interfere with working.  She was honest and upfront about it but didn’t give any detail.  Over time I learned much more about her health problems and now that I am faced with my own issues we have yet another point of commonality.


This project is a reflection and a result of the many occurrences in my life. This latest one has indoctrinated me into a group that we all may be familiar with on some levels.  A group Ali has been a part of much longer than I have. My journey has just begun and I know the strength I require to get through each day, even when it is not always available.  I can say that our friendship has certainly changed since I have joined her group as I am now confronted with hurdles that she has seen in her rear view window for many years.

Email ThisBlogThis!Share to TwitterShare to FacebookShare to Pinterest
Newer Post Older Post Home
Scroll to the bottom of the Stories page to start from the beginning of our chronological tales!
If you subscribe below, we will send you you updates when a new video is posted.
We will only send you updates for new videos, and will not share your information with anyone. Thank you!!