Porchetta
Porchetta is an Italian street food generally served out of big trucks with a tall oven that has the meat on stackable spits. As the meat cooks the fat from the above porchetta drips on the lower rack. There is a catch bin on the bottom so the fire does not flare. The juices from the catch bin are used to baste the meats.

As the name suggests, it is a pork based product and the cuts of pork can vary. What does not vary is that you should use two different cuts of pork, one wrapped around the other. Between the two is a layer of spices and citrus to flavor the meat.

This is not an easy process to replicate at home for a few reasons. One is the size of the end product. Unless you have a large party to feed, or plan on plenty of leftovers, it may not be cost effective.

It is, however, quite a display and the presentation is fantastic.

The picture above does not properly represent the scale of the end product. This is a whole pork loin (not the tenderloin) wrapped in a whole pork belly. The end result is at least 2 feet long and about eight inches high. It is wrapped in twine and cut in half after the four hours of roasting.

The outer layer gets crisp like bacon and all the fat from the belly flavors the loin. Just a pork filled joy and a true sensation for the palate.

This is my home version and I think you will find it both tasty and fun to make. I use a piece of the full pork loin and bacon for the outer wrap. If you can find sliced pork belly, I recommend that for the outer layer. It can be done on the grill or in the oven, but be warned that if you use a higher fat content piece for the outer layer, you may get more smoke than your oven can handle.

You can buy pieces of the pork loin but I tend to buy one whole and cut it down to the size I want for the meal (Depending on the number of guests). The rest I will split between chops, cubes (for kabobs), and other large pieces for roasting.

Ingredients:
Special tools: All these are optional
Total Time: 2 hrs.

In this recipe, we are going to cut the pork loin "Jelly Roll" style.

After we open up the loin we will add the spices and the orange slices. Next we will roll it back up and wrap the whole thing in the bacon slices. If necessary we will tie it with twine to hold everything in place.

The cutting: Don't be afraid. Almost any deviation from the perfect cut can be masked by the rolling and the outer layer of bacon. It will be fine.


If you are using a whole loin or a cut piece from the butcher, you will most likely need to remove the silver skin. This is an outer layer of fibrous skin on the outside of the meat.  It it tough and stringy and is best removed.

Now we are going to open up the piece for our Porchetta. Place the pork loin on a cutting surface with the cut end facing you. Make a cut about one inch from the side of the loin that is your dominant hand (assuming you will be cutting with this hand). 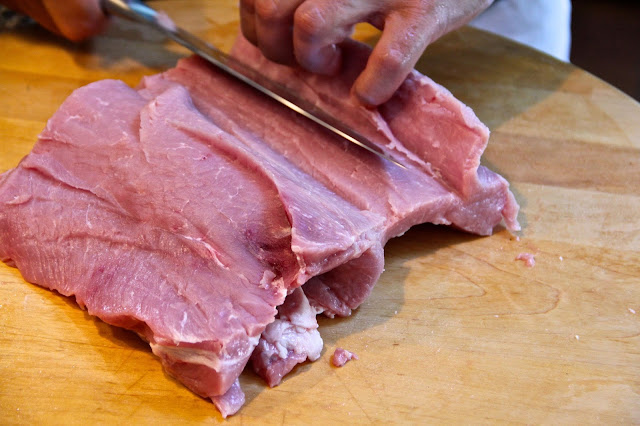 Cut down 3/4" to 1" deep, leaving less than 1/2" from the bottom of the loin. Spread the little flap you have created away from the larger piece. Angle your knife edge so the sharp edge is towards the large piece of pork and the top dull edge is away, creating an obtuse angle with the knife and the pork. Keep cutting and rolling the pork piece away from the knife.

From here you will drag the knife towards you, scoring the point where the larger piece of loin meets the thinner edge, pulling the large piece away with your non-knife hand.

Continue to do this until the you have a nice piece laid out on the table in a rectangular form (or as close to it as possible).

I repeat. Don't worry about any empty spots or uneven sections. It is going to happen the first few times at least.  Unless you are a trained butcher, then it will be perfect most of the time.

Now that we have somewhat of an even rectangle laid out on the table, it's time to flavor the pork.  I often lay out the bacon first but it's not necessary as the piece should be easily moved after you roll it up.

Start by rubbing the top with the crushed garlic. Next add salt, pepper, rosemary, and toasted fennel. Lastly, layer the orange slices to they slightly overlap.

Leave a little room on the edges as the oranges will spread as you roll up the loin. Time to roll up the "Pork Jelly Roll". Turn the loin with the short side facing you and roll as tightly as you can.

Next step is to lay out the bacon on a flat surface, if you haven't already done so, as I have in the photos. checking the length of the pieces to be sure they will wrap around the loin. If not, overlap the bacon a bit so it will create a tight wrap. If the bacon is layered too much you may not get the inside pieces cooked and crisp in the end product.


If using an oven be sure to place a drip pan under the meat to catch the fat. If you have a rack with a catch pan, this will work best. You can use the fat to baste the Porchetta. Yeah, that's right. Baste the the pork rolled in more pork with pork fat.

If you don't have a way to separate the fat from the bottom of a pan, be sure to rotate the Porchetta a few times during the cooking process. It should hold up if the wrapping is tight enough.


Place the pan with the meat in the oven or on the grill (whichever you are using).  Close the lid of the grill to keep the heat consistent.

Best to roast at about 375 in the oven, and about 425 for outside grills. The consistency of the readings on most outside grills is suspect in my opinion, and the higher heat will help when you open the lid too often to check on the meat.

If using a rack and the fat is collecting in the pan, find a way to baste to the meat every 20 minutes. If the meat is directly on the pan, give it a quarter turn instead.


The meat should take about 1 hour and 15 minutes (in either cooking vessel), but most importantly, the temperature should be 135 degrees F. You can pull it out at about 130 degrees, and let it rest for 10 minutes as it will keep cooking.